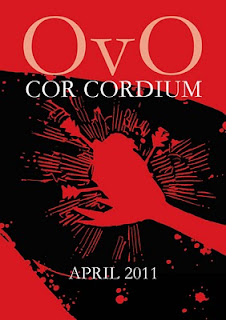 OvO's upcoming full-length Cor Cordium -- the title translating to "heart of the hearts" -- is the epitaph to the memory of idolized English Romantic poet and adventurer Percy Shelley, whose final resting place is in Roma, Italy. The diverse, avant/conceptual ten-track opus is the sixth album from OvO, the members of the duo collectively residing between Italy and Germany.

The OvO name is already well-known throughout the underground noise, doom and experimental scenes, OvO are from a realm of contaminated heavy rock, where noise elements act as breaks between the sonic. deconstructive assaults of Cor Cordium. The hi-fi recordings captured on the album, for the first time in OvO's history utilizing any sort of overdubs, present a rational structure hidden under the apparent madness of the compositions.

In addition to the standard digipak version and digital download, there will also be a limited edition version which will include the CD, an LP version, and a DVD featuring a live performance of OvO's previous album Crocevia. Cor Cordium is due out Arpil 18th, 2011 via Supernatural Cat Records